By: Handini
Proof notes are highly sought after among collectors. Compared with unissued remainder notes or issued notes, their population estimates are generally much lower. Remainder notes are sometimes common as dozens of sheets may exist for certain banks, The Citizens Bank of Louisiana is one such example where plenty of remainders exist. Issued notes can be worth more than a remainder note if they are less common than the remainders. However, issued notes typically can be found in various grades where some of them may be so worn out that they are inexpensive despite the rarity of a note.
Since roughly 8 or so proof notes were made for each variety and the American Banknote Company sold their proof note archives in 1990, most of them are in pristine condition and thus appeal to a plethora of collectors from pre-civil war buffs, to numismatists, to art collectors, not to mention those who purchase particular notes based on theme or sentiment. After all, anyone watching the Antiques Roadshow has heard them mention numerous times: "Condition Condition Condition".
A little over 10 years ago many proofs sold in the $100 to $300 range but now tend to sell in the $1200 range, although some can still be found for several hundred dollars (See: Reasons To Collect Obsolete Currency Instead Of Coins). Recently however, some proofs have sold for tens of thousands, as attested by the recent sale by Heritage of notes from the Roger Durand Santa Clause Collection. A couple notes from this collection included a $5 proof from the Saint Nicholas Bank of New York, NY and a $2 proof from the Knickerbocker Bank of New York, New York. These notes sold for over $10,000 and $20,000 respectively.
What made these notes go for a lot is the fact that they are extremely rare with the $5 note being only one of 2 known and the $2 proof being one of 3 known (Source: Heritage). Moreover, certified banknotes tend to fetch a lot more than non certified ones as their conditions have become established by a 3rd party grading service. Santa Claus themed antiques are generally popular among collectors and these two notes are much earlier than what is generally available to collectors.
Therefore proof notes which are graded, extremely rare, excellent condition, and which have unusual and rare vignettes on them are exceptional investments.
Thursday, January 26, 2012 No comments:

By: Handini
When a note gets redeemed, it usually gets cancelled so that it can't be spent anymore. These cancellations on the notes were done differently depending on the institution from which the note came. The Confederate States for example, would punch large holes in their notes as shown below.
$10 Confederate States Of America (1862) 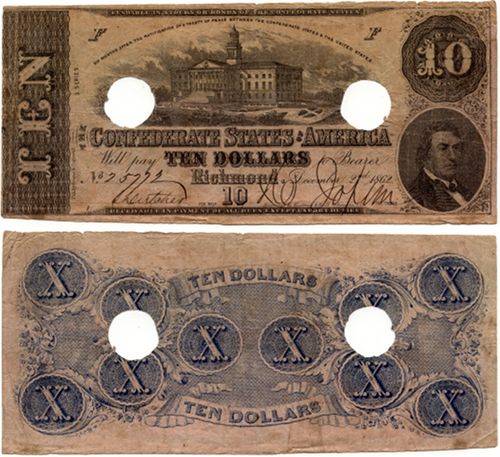 Image Contribution: Handini
Notes issued by the Government of Texas on the other hand, would cut cancel the notes. This allowed the notes to be cancelled by one can still appreciate the beauty of the note as shown in an earlier post on Texas. The Texas Treasury warrants however, would have X's drawn on them.
Some of the more interesting cancellations can be found in the Bible Belt, namely North Carolina. The Bank of Washington, NC would write the word "Judgement" on the note since the note is no longer in circulation. It is as though the note has died and had judgement passed on it.
The Moravians on the other hand, were a highly religious community which settled in Salem, NC (Now part of Winston-Salem) back in the 1700's. The Salem branch of the Bank of Cape Fear, rather than passing Judgement on a note when one returned it to the bank, would have a red cross put on the note to indicate that it has been redeemed.
$3 Bank Of Cape Fear, branch at Salem, NC (1860)

By: Handini
About a year ago I wrote about the Bank of Cape Fear. The first note shown on that entry is my prized $3 note from the Salem Branch. At the time I purchased it, these notes ranged between $50 to $100 but this one cost me $200. The dealer had written on the holder: "As good as this note gets". It has been the best one I've seen, although I don't actively scout for more $3 notes.
$3 Bank Of Cape Fear, branch at Salem NC (1859)

Haxby NC-90-G388
Image Contribution: Handini
Other than slight wrinkling on the right side and the fact that the paper is slightly toned, this note is in excellent condition. I recently found such a $3 note in the online gallery at UNC, although from the Wasington Branch, which is also beautiful.
$3 Bank Of Cape Fear, branch at Salem NC (1859)

Image Source: UNC
The paper is nice and bright and doesn't have any creases, other than a little folding near the lower right and left corners, making this an equally nice note. Clicking on either of these images will take you to a page that allows viewing a larger image of the note.
Tuesday, January 24, 2012 2 comments:

By: Handini
Washington, North Carolina is the first city to be named in honor of George Washington. It was established by James Bonner in the 1770's and was originally called Forks of the Tar but then renamed in 1776 to Washington (Source: http://www.pamlico.com/washington/history/).  A major commercial port for more than a century, it is now a lovely small coastal town with a rich history.

It is clear from the catalog numbers for both Pennell and Haxby that  there are two varieties of each denomination. The ones without the letter A are the earlier issues, as shown in the image above, and do not have any red or orange tint on them. The later issues (those with a letter A designation in the catalog numbers) have red ink on them.

Bank Of Lexington $10 Payable At Graham

By: Handini
A couple of months ago I was at a coin show and found this $10 Bank of Lexington note. Thanks to it's condition it was relatively inexpensive. Last April I posted about the Bank Of Lexington, NC and mentioned that they had a branch in Graham, North Carolina as well and not I have a note from the Graham branch.
I had the opportunity to purchase a $5 note from the Graham branch several months earlier but didn't. Of the 6 varieties found from this bank, All 3 varieties of the $5 notes and two of the $10 notes are inexpensive and "easy" to find. It is the green $10 note which is the one that will cost a fortune. When I purchased this note I mentioned to the dealer that I would like to find a green $10 and I struck a nerve. He had a nice example of one and another dealer conned him into selling him that note which he got the shorter end of the stick.
$10 Bank Of Lexington, NC Payable At Grahm (1860)

By: Handini
Back in November I was at a numismatic convention (coin show) and found this interesting check from 1843. It was from the Philadelphia and Reading Rail Road Company which was formed in 1833 (Source: http://en.wikipedia.org/wiki/Reading_Company).
Since this check is from a company and not a bank then any money they issued would not be listed in Haxby. If they issued any currency then one would likely find it in Hoober. Since it is not listed in Hoober, this company probably did not issue any currency. Nevertheless, this is still an interesting item for obsolete collectors.
$45 check Philadelphia and Reading Rail Road Company (1843)

Image Contribution: Handini
Another interesting thing to note is the signature on the lower left. It appears that Elvis signed the note. So apparently he can be traced to living in Philadelphia as early as the 1836 where he worked for the Manual Labor Bank until he got a job as the Treasurer of the Philadelphia and Reading Rail Road Company. Regardless of whether or not Elvis did indeed sign this note (j/k), this is the company by which Reading Railroad on the classic board game Monopoly is named after (Source: http://en.wikipedia.org/wiki/Reading_Company). However, since it is not an obsolete note but rather a check I would hesitate to refer to it as Monopoly money.
Thursday, January 19, 2012 No comments:

By: Handini
Recently I was at a yard sale and I found a movie poster for one of the Marx Brothers movies protected in a poster frame. While the frame was in rough shape the poster was in pristine condition and there was no date on it so I couldn't tell if it was an original or a replica. Because of my uncertainty, I set it down and inquired about a painting which had the signature of a famous artist as the name sounded familiar. As I was told that it was a replica, a guy looked at the poster and told the lady "I'll pay you five bucks for it."
Although I was hesitant to pay the $5 for the poster and he wasn't, I asked him if he knew much about movie posters, which he didn't. In talking to him however I found out that he and his wife go to yard sales and find stuff to put in their booth at a local antique store, one which I didn't know existed before that day. This was something they did as a hobby together as he had a full time job also.
Needless to say, after we were done with the 4 or 5 yard sales that were listed in the newspaper on that chilly winter morning we went to the antique store where I found the following CSA bond coupon from a $100 CSA bond. Coupons were attached to bonds and cut off one by one over time. This one is in the amount of $4 from the Confederate States Loan of August 19, 1861 and payable on January 1, 1867.
$4 CSA Bond Coupon (1861) 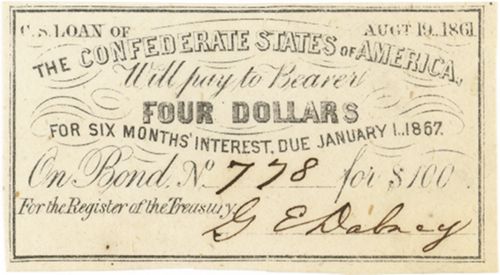 Image Contribution: Handini
Although the coupons themselves wouldn't be as rare as the bond since each bond had several coupons attached, the book Confederate Bonds And Certificates lists the bond (their catalog number is AD-30) as a rarity of 3 on their 12 point scale with 1 being the most common and 12 assigned to the rarest of the rare.
Fortunately for the collector, not the investor though, the price of bond coupons hasn't changed much over the past few years (The bonds themselves on the other hand . . . ). These coupons can be purchased anywhere between $3 and $8 each so are inexpensive relics from the Civil War. While I managed to hold on to a $5 bill when I considered the movie poster, I was unable to hold onto it when I decided to purchase this bond coupon (Note: I really paid via credit card to get points). The only difference is that people don't charge sales tax at a yard sale but they do in antique shops.
Thursday, January 19, 2012 No comments: