The Summit County Bank of Cuyahoga Falls, Ohio, issued fractional currency, not all banks issued fractional notes so this is a nice addition to my collection. The note is a remainder note however, as it lacks a serial number. PCGS grades this note as an AU 55, although it appears to be more of an MS 66 note. I will have to examine the note carefully to see if there is any flaw that is not obvious. Of course they're known for being extra stringent on their grading standards. 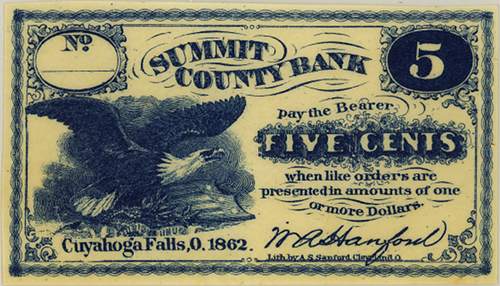 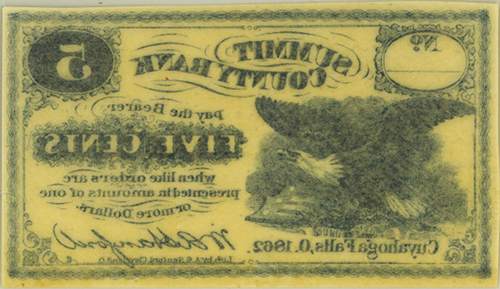 I recently purchased a colonial PA note from 1772 with the signature of Adam Hubley. He was a Lieutenant Colonel who commanded the 10th Pennsylvania Regiment in the Battle of Paoli (1777) (Source: USHistory.org), the Battle of Brandywine (1777), and the Battle Of Germantown (1777), during the American Revolution. 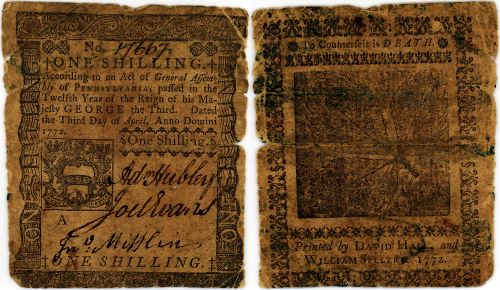 Other Denominations of April 3, 1772 PA colonials include:

While it is not too difficult to find colonial money from the 1770's, sometimes, earlier notes can be found. New Jersey colonials from the 1760's also turn up on occasion. Probing into the earlier decades of the colonial era however does not necessarily prove too difficult for the colonial collector. As far as North Carolina colonials go, the notes from 1748 and 1754 are not as rare as other earlier colonials. Of course, colonials earlier than that almost never turn up. Good luck finding a colonial Massachusetts note from 1690, and being able to afford it.

I recently purchased a 30 shilling note from North Carolina dated March 9, 1754. Many of these notes appear to have been so crudely cut that a lot of them have portions missing such as the 54 or just the 4 from the date. A lot of these notes bear, on their reverse, the signatures of people who came across the individual note. This was likely done to track who spent it in case it turned out to be a counterfeit. 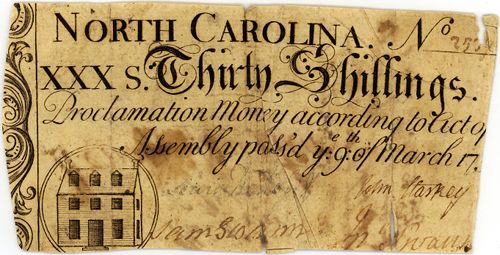 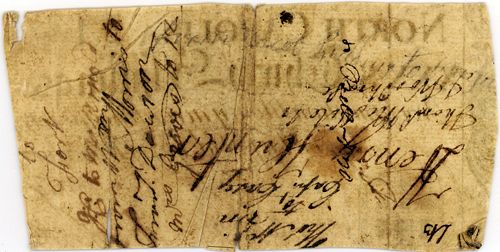 Other Denominations of March 9, 1754 NC colonials include:

I love the plain and uncluttered design of this note, as opposed to the later colonials of the 1770's. Note how this note is declared to be 30 shillings and not backed by Spanish Milled Dollars, gold or silver as the Continental Currency was. Paper currency began as fiat currency and upon the realization of the distrust people had for the paper, they became backed by a tangible asset like gold or silver. With the fiat dollar of the Federal Reserve System, we have come full circle. The dollar of today will remain abundant, and even more so, than the colonial fiat notes. Thank you Bernanke. Our great great great grand children will be able to amass a large collection of 100 dollar bills from our generation for the price of a gram of copper.

Bank Of The Valley, Winchester, VA


The Bank of the Valley of Virginia, was authorized in 1817 (Source: Affleck) and headquartered in Winchester, VA. It operated from 1818 until it failed in the 1860's (Source: Haxby). There are many different varieties of notes from this bank in denominations of $1, $2, $5, $10, $20, $50, and $100 as well as notes from various branches throughout the state. In addition to the main branch in Winchester, the towns of Charlestown, Christiansburg, Leesburg, Moorefield, Romney, and Staunton harbored their own branches of this bank.

The dates of operation for the different branches:

Yesterday, I wrote a post about some currency that didn't arrive in the mail even though the tracking number claimed it arrived. This morning I called the local post office and they said that the item was accidentally scanned as arrived but it would arrive today. It arrived. Now there is no need for me to contact local coin shops to keep an eye out for my notes. No need to scan the eBay listings, and no need to report a theft.
Monday, November 19, 2012 No comments:

Lost In The Mail Or Stolen?

Yesterday was a relaxing Saturday. I had nothing to do for once. It has been a long time since I putted around the house for an entire day. I did a little cleaning, organizing, and even laundering. I was also eagerly awaiting the mail to receive some more currency I had recently purchased off Heritage.

I would periodically check the tracking on the shipment which was supposed to arrive that day. I waited all afternoon. Eventually the mail arrived, late in the afternoon. The female mailman usually puts my orders at the door since they won't fit in the mail box but there was nothing at the door. Since sometimes an additional mail truck follows I still had hope that it would arrive. I would keep checking the tracking number to assure myself that it was still out for delivery. Finally, close to 8:00 pm the tracking said delivered. There was noting at the front door.

I called Heritage and they were closed. The post office was closed also. I then sent Heritage an e-mail indicating that the item did not arrive despite what the tracking number claims. Then I took Betty (my car) for a spin to see if the package could have been sitting in front of one of my neighbors doors and found nothing.

Luckily, I am caught up at work so I plan on calling Heritage and the post office tomorrow when they open. I hope the mail carrier remembers what door it was placed at and is able to recover it, and if not I hope I can get a refund. I also plan to call the local coin shops to give them a description of the notes along with their serial numbers in case anyone tries to sell them. I'll have to search for them on eBay, not that that will do any good. I wonder if the mail carrier could have been filling in for the usual carrier and was inexperienced, or if she too did some laundering yesterday and was the one who took it. Hopefully though, I'll receive my money.
Sunday, November 18, 2012 No comments: