Savanah, Georgia is a city rich with history. This proof note is one of these relics from it's historic past. Although the top of the note is in terrible condition, the beautiful vignette on the lower left is still intact. It features a guy on a horse with a wagon.
$1 The Mechanics Savings Bank, Savannah, GA (PROOF)

By: Handini
While Ben Franklin is known for printing Poor Richard's Almanac, he also printed some colonial currency such as this 20 Shilling note from the Colony of Delaware in 1759. He printed these along with David Hall who eventually printed Continental Currency along with William Sellers.
To foil counterfeiters Franklin, who wrote about the need for currency as early as 1729, began the practice of putting mica flakes in paper and printing leafs on currency as an effort to foil counterfeiters. (Source: http://www.loc.gov/exhibits/treasures/franklin-printer.html) Since paper money was in it's infancy and not readily accepted, this and other measures were employed to hinder counterfeiters. One such measure included putting strands of blue fiber in the paper. A counterfeiter was generally sentenced to death by hanging if they were caught. The reverse of this note states To Counterfeit is D E A T H, as a means of deterring counterfeiting.
20 Shillings, The Colony Of Delaware (1759) 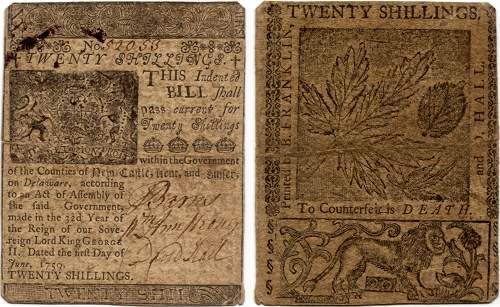 Reasons To Collect Obsolete Currency Instead Of Coins


While coin collecting has been a hobby of mankind since antiquity, currency is a much more recent phenomenon and is still gaining interest among numismatics. Most currency collectors in the US collect United States Paper Money issued by the government since the 1860's. These notes remain legal tender and their values for some of the rarer varieties can be worth 5 or 6 figures. Broken Banknotes have recently been gaining ground in the currency aspect of numismatics that their prices, although on the rise, are still low compared to a United States paper note of comparable rarity.
The coin market on the other hand is also on the rise for the most part. Several years ago I purchased an 1895-O and an 1895-S Morgan Dollar. While in their current condition (both are lower grade) they have managed to increase in value roughly 5.5 times of their cost. I also purchased 3 1881-S MS66 Morgan Dollars. While the 1895 Morgans in my collection are uncertified, all 3 of the 1881-S Morgans are. Two of them are certified by PCGS and the third, and finest of the lot, by PCI. The prices for these Morgans are currently what they were worth over the past decade. With the lower value of the dollar however, it means that their values have gone down. Naturally, both 1895-O and 1895-S Morgans are desirable and worth considerably more than the 1881-S which is a very common variety.
The same thing takes place with currency to where the rarer notes tend to go up in value a lot sharper than the more common ones. This is where broken banknotes prove themselves as a great investment value, as they are all quite rare. When purchasing broken banknotes, the same holds true as with coins - the rarer and the better the condition, the greater the investment potential.
Gold too has risen drastically over the past decade. Roughly 10 years ago it was trading for around $300 a troy ounce and now it is above $1300 for a troy ounce. Of course, roughly 10 years ago I purchased 5 $5 proof notes from the East River Bank of New York, NY. I purchased them from three different people so I paid a range of prices for them. A couple of them however, cost only about $115 each. I recently saw them for sale on a currency dealers website for close to $1200 each, and I noticed that they also sold at those prices. So while gold rose 4.5 times, and 1895 type Morgans rose about 5.5 times in value, these proofs rose by as much as 10 times their value.

Haxby NY-1570-G16
Image Contribution: Handini
Collecting obsolete currency is not only an interesting hobby, but can be a rewarding one as well.
Sunday, February 13, 2011 No comments:


The Bank Of Cape Fear, NC (headquartered in Wilmington) is one of the more popular banks from which to collect banknotes. It operated from 1804 to 1866 and had branches throughout the state of North Carolina. It was one of the first banks to have branch banking.
There are many options with regards to collecting notes from this bank. Many of the earlier notes are hard to find and contemporary counterfeits do exist. The later notes from the 1850's and 1860's are beautiful and many contain red ink as well. Some also contain the intricate lace work as seen in the $6 note listed below. A more challenging option when collecting is to develop a set of notes from an individual branch or from all of the branches. One could even collect a specific denomination from all branches if desired. Either way, notes from this bank have a lot going for them and their prices have soared in the past few years. To sum up the investment potential from this bank, the bank has a desired name, (most likely due to the movie Cape Fear), it offers many beautiful varieties and vignettes, it is one of the most popular broken banks from which collectors seek out currency.
$3 Bank Of Cape Fear, branch at Salem NC (1859)

Haxby NC-90-G388
The dealer I bought this note from had it advertised: "As
Good As This Note Gets" and I haven't seen a nicer one yet.
Image Contribution: Handini
$3 Bank Of Cape Fear, branch at Wilmington (1860)

Note: Due to the mutilated condition of this note,
I kept it in it's sleeve and took a photo rather than a scan.
Image Contribution: Handini
$10 Bank Of Cape Fear branch at Washington (1851)

Image Contribution: Handini
I find the Salem branch intriguing but that will be another entry at a later date. I also have a couple more Cape Fear notes to scan so check back and I should eventually have them uploaded.
Thursday, February 10, 2011 9 comments:


A lovely $5 proof note from the Bank of Greensborough, Georgia. Although there is a small piece missing at the bottom due to the holes punched where the signatures go, the vignettes on this note are beautiful. What I find intriguing about them is their depiction of everyday scenes. The lower left not only shows a couple of guys shearing sheep but also shows a small child observing them. The center vignette shows some guys chopping wood and the vignette on the right side shows people harvesting corn. Vignettes like these not only make this a beautiful note but it renders it appealing to collectors of Americana as well as currency collectors. This can result in a greater profit potential for investment purposes.
$5 Bank Of Greensboro, GA (Proof)

By: Handini
Maryland is one of the easier states to find colonial money from. Consequently, they tend to be affordable. What can affect the value of a colonial note is the state it came from, the printer, or even the signatures. There are some colonials that have signatures of some of the founding fathers. For example, some colonial New Jersey notes bear the signature of John Hart (1711–1789), who signed the Declaration Of Independence. The note featured below has none of these features but I find it an attractive colonial with an interesting denomination. Since colonials don't have the beautiful elaborate vignettes of broken bank notes their values tend to remain stable, increasing ever so slightly over time.
$4 Colony Of Maryland 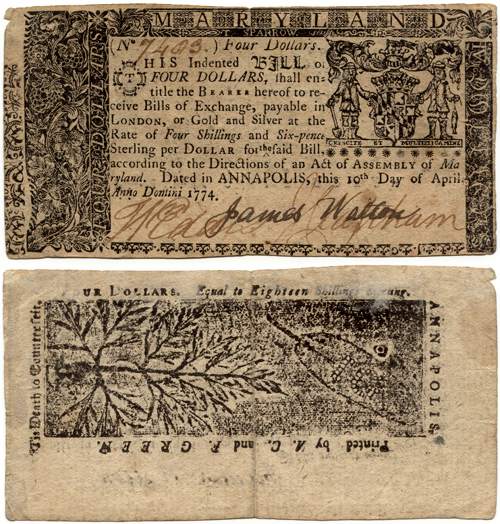 Image Contribution: Handini
Currency was still in the process of gaining acceptance by the masses so they made these notes backed by gold or silver and assigned the penalty of death to those who counterfeited currency. This was generally executed by hanging the counterfeiter.

Here is a post with more information on colonial Maryland notes on someone else's blog: http://coinsblog.blogspot.com/2011/01/old-maryland-notes-new-owner.html

The Farmers And Mechanics Bank

By: Handini
A lovely $5 proof note from Camden, New Jersey from the Farmers And Mechanics Bank. Proof notes had holes punched in them where the signatures go. This insures that one doesn't sign and issue the note fraudulently. Consequently, many proof notes exhibit holes which have tears in them. This is evident in this example by the missing piece near the hole which is furthest to the right at the bottom of the note. Sometimes these tears are repaired so caution should be exercised when purchasing a proof online.


$5 The Farmers And Mechanics Bank of Camden, NJ

The Bank Of Clarendon

By: Handini
Here is a lovely, low serial number, $5 note from the Bank Of Clarendon at Fayetteville, NC from 1861. A beautiful vignette of classical figures are seen in the top center and another lovely maiden is shown integrated into the Roman Numeral V, on the left. On a side note, Fayetteville is sometimes referred to as Fayettenam, peradventure due to Fort Bragg being there.
$5 Bank Of Clarendon, North Carolina (1861)

Pennell 450 A
Image Contribution: Handini
These are one of the easier North Carolina notes to find, although not the easiest, and certainly not in as good of a condition as the one shown above.
Friday, February 04, 2011 No comments:

By Handini
Many notes from The Citizens' Bank of Louisiana are quite common, as far as broken bank notes go, and are easy to obtain. Although the following $1 and $3 remainder notes don't have any nice red or green overprints, which would make them a more colorful note, they posses beautiful vignettes. Adding to their luster is the fact that they are still in pristine condition. These notes are still at an affordable price so it would be wise for one to add notes like these to their own collection while they haven't all been tucked away in other people's collections.
$1 Citizens' Bank

Haxby LA-15-G6
Image Contribution: Handini
The bank operated from 1833 - 1911 (Source: Haxby) so it survived the Civil War, unlike most banks. Shown below is a $5 note from Shreveport which would be classified as Haxby LA-15-G60a except the reverse shown for the note, found on page 519 of volume 1, is different. There are other notes also where the reverse is different then what is shown in Haxby for the note, such as a $5 note from the Bank Of East Tennessee. 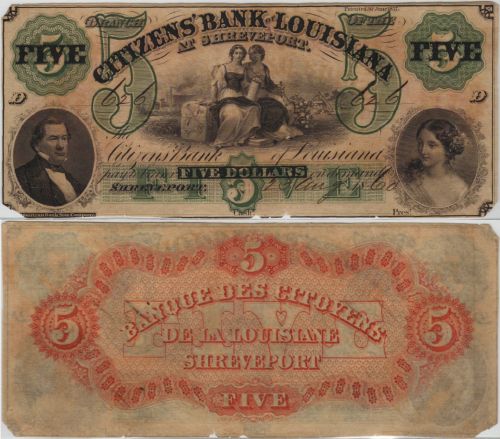 Haxby LA-15-G60a
Image Contribution: Charles Plancon
Another interesting thing about the $5 note shown above is the fact that it is not signed and yet it is not quite a remainder note. It has the date and serial number written down but never managed to get signed by the Cashier or President of the bank.

The Government Of Texas

By: Handini
A couple lovely bills issued by the Government of Texas, Houston, TX, 1839. Almost all of these early Texan notes are cut cancelled and have to be handled with care.
$20 Government Of Texas (1839)

Image Contribution: Handini
While there are notes bearing Sam Houston's signature, it was his secretary which signed his hame on these notes. Oh January 5, 2011 however, a Republic of Texas note sold for $63,250 (found within the pages of an old book). It was an uncanceled note bearing his original signature and not his secretary's. Source: Heritage
Tuesday, February 01, 2011 No comments: